The Earth is ascending. This ascension is being driven through internal processes of transformation of consciousness of human beings and in these processes are involved various energies and beings that help us in our journey. 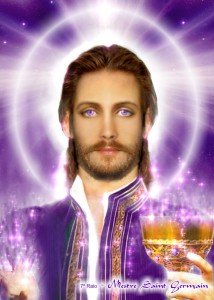 Master Saint Germain is the regent of the Age of Aquarius and chohan of the 7th ray – the violet ray. The violet ray represents the Freedom of Forgiveness. The last incarnation of the Master was as Count of Saint Germain in the 18th century in France. It is Saint Germain who, during the multidimensional therapy course,initiates violet flame. Saint Germain appeared in 1930 to Guy Ballard (an American Mining Engineer) at the foot of Mount Shasta in California. From that date, he was founded by this and his wife, Edna Ballard, the “I AM” movement whose purpose was to disseminate the teachings of Saint Germain and the remaining Ascension Masters.
Some of Saint Germain’s termane incarnations were:

The Violet Flame is a gift from God to humanity at a very special time for the planet – the time of Ascension. It was brought to us through the hands of the master ascenso Saint Germain and allows to transmute negative thoughts and emotions into positive thoughts and emotions. The Holy Spirit acts through the Violet Flame bringing relief from physical, emotional, and mental suffering. It can be used for forgiveness. However, it should be noted that when it is invoked, its action and result is left in God’s hands, and our negativity is eliminated to the extent of our merit and intention to transform our being, our attitudes, way of thinking and acting for something better.

The Violet Flame is an extraordinary tool of healing and ascension for any light worker (holistic therapists, for example). After the Initiation to the Violet Flame which is provided by Saint Germain during the Multidimensional Therapy course is as if we became priests and priestess of the Violet Flame and, every time we use it, we are already performing very profound healing and providing service to the Light as well as helping the ascension of the planet.

The way we use it is extremely simple. Just visualize, mentally, a situation of conflict between two or more parties, including us or not, and visualize the image in our mind being engulfed by violet-colored flames from our hearts. It can be used, for example, to resolve conflicts in a conjugal relationship and help forgiveness on both sides.

One of the exercises that are performed with The Violet Flame during the Multidimensional Therapy workshops after the Initiation to the Violet Flame consists of choosing 3 people who are very important in the life of future multidimensional therapists and with whom there are situations of conflict. Students are then asked to visualize themselves to embrace each of these people and to see themselves both involved with the flames of violet color bursting from within their hearts, transmuting all negative energy into Peace, Love, and Light, as if they were both inside a campfire whose fire is purifying. With Forgiveness, the karmic bonds that unite people in stories that sometimes drag on for many lives are finally cut off and one begins to live with a much greater Freedom and can begin to love the other in a freer way, no longer hostage to the karma that initially put them in each other’s way.

The Violet Flame is linked to Divine Mercy and Compassion.