The first presentation of the candidates will be in person so that we can demonstrate how the sharing will take place.

1º Indicate interest in the vacancy
2nd Attend the interview to receive demonstration of how the work will be performed
3º If you are interested in the service, you will receive a txt file listing about 180 Facebook groups.
4º Join the 180 groups at an average of 15 groups per day. If you make more than 15 requests to join Facebook groups per day, this feature will be temporarily blocked by Facebook so it is recommended that Facebook guidelines are respected.
5º At an average of 15 requests to join, after 12 days, the applicant will have sent 180 requests to join the groups from his Facebook account
6º For each group membership, you must add to the corresponding line in the txt file the following text: “(AD)”. This acronym means that you have joined the group.
7º When you have at least 150 “(AD)”, that is, when you have been approved in at least 150 groups, you must tell us that you are ready to start sharing posts.
8º You should not mark a group with “(AD)” if, after requesting to join the group, you have not yet received the approval of the administrator(s)/moderator(s) of the group in order to join it. You can check the groups you have joined at
https://www.facebook.com/SEU FACEBOOK/groups ID.
9th You will be provided the URL of about 3 or 4 posts to share in the groups on the list marked “AD”.
10º For example, 300 shares can be requested until 20:00 of the day following our request. 300 shares correspond to a remuneration of 12€ (2×6€x150 shares).

Facebook imposes some usage rules that regulate the sharing of posts in groups. If these rules are flouted, Facebook will usually temporarily (for 7 or 15 days) block access to the functionality of joining and posting to groups.
Therefore, you should never share the same post in the same group more than once over 24 hours. You should only share one particular post in a group per day. Otherwise, it will be considered SPAM and the posts you have published in the group will likely be deleted.
Additionally, the applicant risks being banned from the group by the group administrator(s). Therefore, in case these posts were removed by the administrator, they will not increase the post’s share counter and therefore you will not be compensated for them. Therefore, we ask that the candidate respect the rules of publication in groups that Facebook imposes.

The payment will always be made daily until 20:00 and may, if the candidate requests, be made more spaced (for example, once a week or every two weeks) compulsorily in person in our space, so that we can check together the number of shares made according to the facebook counter shares in the posts that we asked the candidate to share.
Only posts that have incremented the counter will be remunerated.

For calculation of the payment, the following formula will be used: x=6 * n/150.
x => payments in euro rounded to the 2nd decimal place
n => total number of shares made by the service provider

Forecast of the applicant’s earnings

On average, 150 shares take an hour to do on a regular PC since on a smartphone or tablet it takes longer to copy and paste the name of the groups to speed up the task. If the candidate makes 150 shares a day (6€) at the end of a month will have earnings of 180€ (6€ x 30 days). Additionally, by creating, for example, an average of 30 events per day in 30 different groups (each event per group is paid at $0.20) you will be paid an additional $6 per day which will add another $180 to your monthly income, which results in $360 of extra monthly income. Eventually, in a given month, there may be a need for more shares and events which will increase this value.

Payment of the events created in the groups

Nature of provision of services/work

Work may be performed remot ely anywhere the applicant has access to the internet and a smartphone, tablet, phablet or laptop. In this way, the applicant will be able to reconcile one or more jobs he or she already has with this one-off service provision. This service is not a part-time or full-time job but an extra income that you can earn by using some of your free time on Facebook to promote our page by boosting marketing activity in Facebook groups and get paid for it. Therefore, the service provider is not integrated in any organizational hierarchy nor obliged to comply with any defined work schedule.

The nature of the work will be one-off. It is initially predicted an average need of about 600 to 1200 shares per week of our posts and may increase gradually as the need for promotion of events on our page evolves.

We have a preference for people from the Lumiar, Lisbon area and who show a taste for marketing, advertising and therapies, however, this is not an eliminatory factor.

The candidate should be fully proficient in the basic skills of Facebook activity such as making likes, uploading photos among others as well as internet browsing.

The image below represents the text file that will be delivered to you when you accept the service so you can begin your membership in the 180 or so groups. As your membership in each group is validated by the respective moderators and administrators, you must place the initials AD in front of the corresponding text line. This abbreviation serves to facilitate the identification of the groups to which you have already joined.

The image below illustrates the process of joining the groups that are in the txt file that is given to the applicant. Typically, you should scroll through each record in the file and put the name of the group into the Facebook search bar. After identifying the group whose name should match in full, you should click on the “Join” button to send your membership request to the moderator/administrator of that group. As stated above in this proposal, you should not send more than 15 requests per day in order not to be temporarily blocked from using this functionality which would imply a longer waiting time to start your service provision. 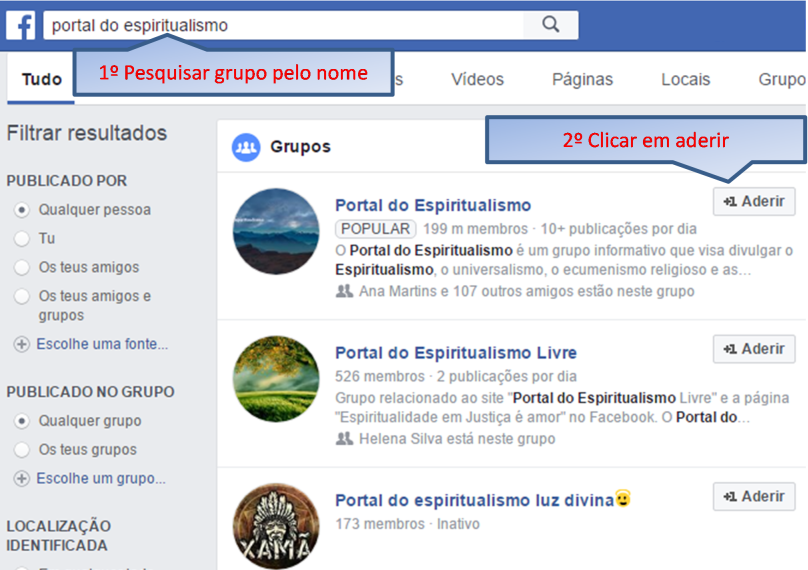 To increase the speed with which you share your posts in the groups marked “AD”, you can from Windows 7, put the notepad window with the groups side by side with the Facebook window. That way, you avoid having to minimize and maximize the two windows in succession which would make it take much longer. On average, sharing a post in 150 groups takes about 1 hour with this process. So, sharing a post in a group shouldn’t take more than 24 seconds unless your internet connection is quite slow.

Facebook may temporarily block your group posting feature if you make more than 150 shares of the same post within 24 hours. However, Facebook warns you beforehand with a window asking you to enter a verification code (captcha) to validate that whoever is doing the sharing is a human and not an automated software (bot). When this verification window appears, the applicant must enter the code correctly and suspend new shares for 24 hours. If after that window appears, the applicant continues to make more shares without waiting 24 hours, Facebook will temporarily (for 7 or 14 days) block access to that feature. 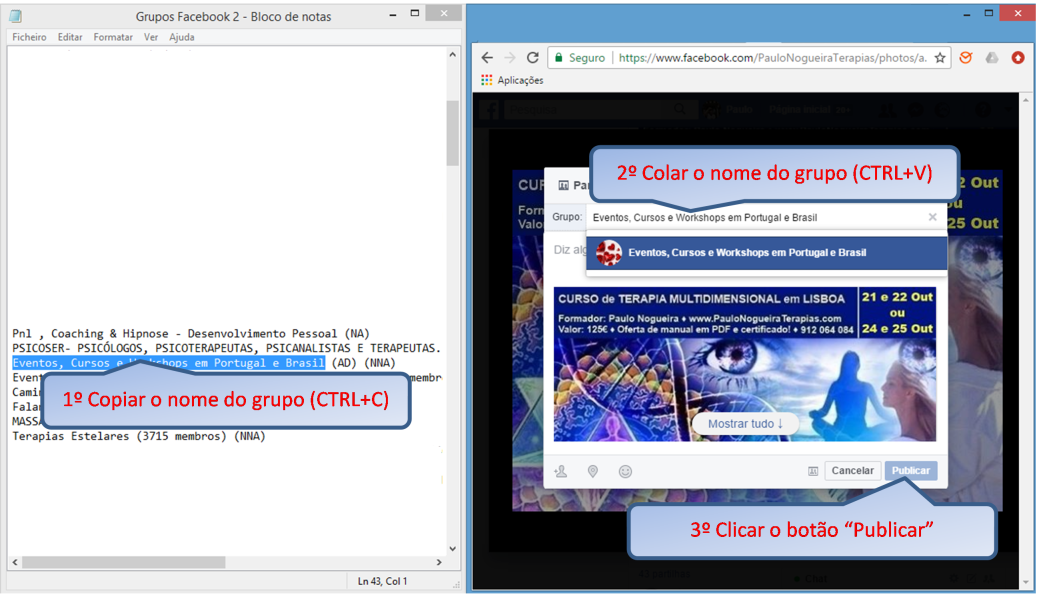 If you have any questions or request more information please contact us by message.